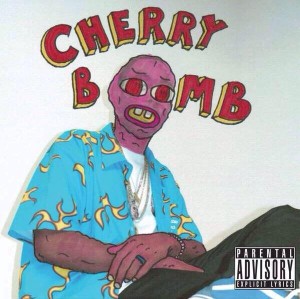 Hmm so what to say Tyler, released his fourth album Cherry bomb on monday and after a couple of listens, I have to say I’m a fan. Now I have always been a fan of tyler and his crazy ways but this album is a lot more grown up in some ways. With guest appearances from Schoolboy Q, Charlie Wilson, Kali Uchis, Kanye West, Lil Wayne and Pharrell Williams.

Its a different kind of tyler. The hero worship to Pharrell is there but and its something you can enjoy. the album is chaotic and maybe thats the sound he was going for but I’m a fan and its an interesting album to say the least. any fan of Hip-hop will be spilt down the middle because they won’t know what to make of it. Cherry bomb is near an hour long with crazy sonics, synths and strings and great chords which make it for a interesting listen.