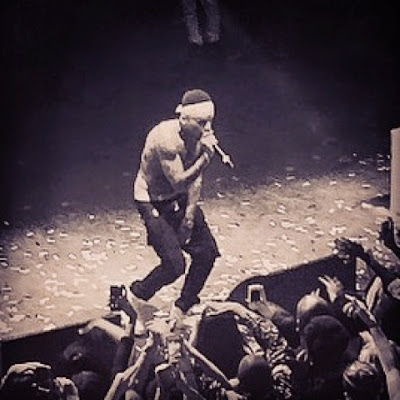 So Kid Ink has been around since 2009 and became popular when he released his ep. He performed at the Mobo Awards on the 22nd of October at Wembley Arena and performed at the O2 Shepard’s Bush Empire and man was it great, The man came did the hits and turned up like the rest if us. Most of the songs he performed was with the ones that he collaborated with Tyga and Wale and Meek Mill as well as other artist.
He played all his songs which I loved of course like we all want a tattoo of his name cause the man knows we love him and the way I am, I would like the most in appropriate song for my age which is normal I suppose because Bad Ass is one song I love
Kid Ink is one of those performers who love to give to the crowd and smoke with the crowd. Everyone was chilled and jumped when he jumped
The fact that he loves tattoos is another reason I love this guy and the energy he brings when
Performing is something else he wants everyone to enjoy which is something that not many artist care about.
The man had a great setup on stage as well, had a little movie of him playing while he was performing and everyone wanted more.
Peace Out !!!!
angiesquestxoxo